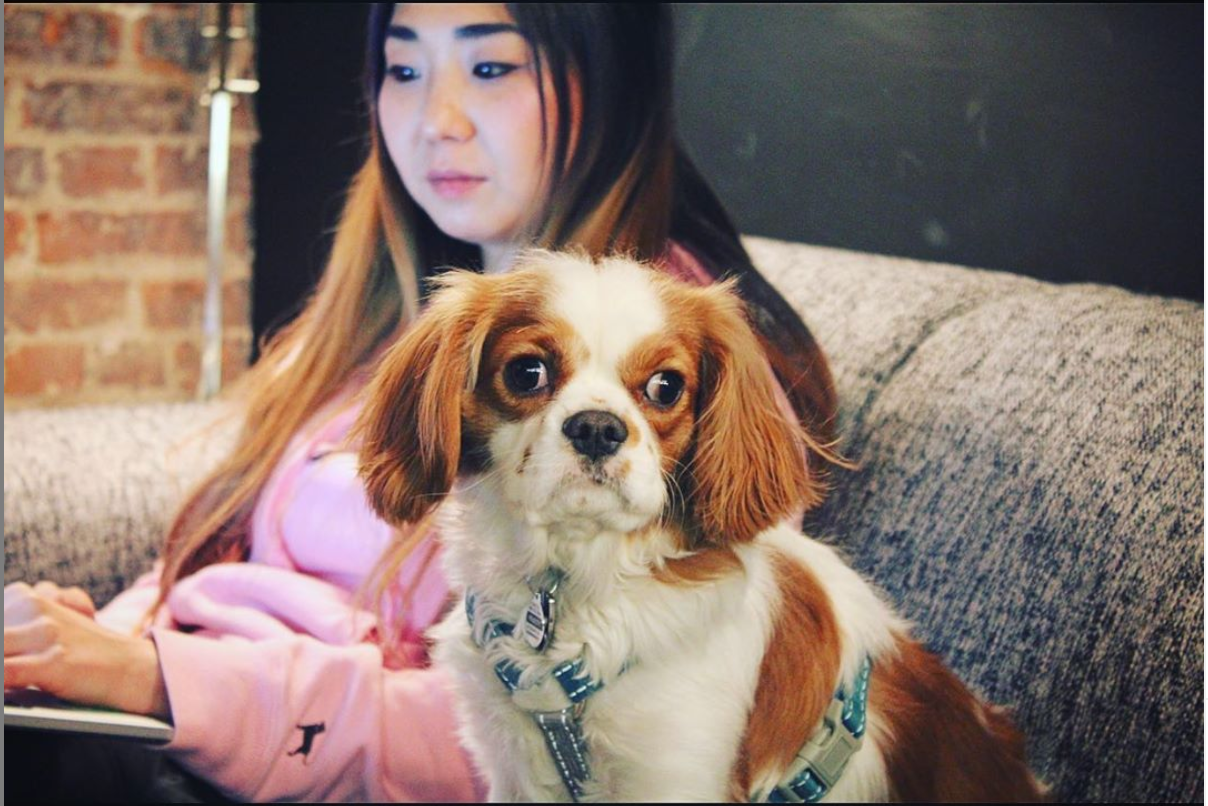 When candidates are seeking new opportunities, they’ll assess a company on, among other things, the benefits, perks, and amenities they offer and whether those match their needs and lifestyle. An increasingly desired perk in recent years is a dog-friendly office, especially in New York City, say SquareFoot’s brokers. Much like residential real estate, not every building allows pets. So buildings that do permit them become ever more coveted by companies that believe this benefit is an integral component of their company culture.

Employees who wish to work in dog friendly workplaces aren’t exclusively canine owners themselves, though. Many people prefer to work beside man’s (and woman’s) best friend for the emotional lift they can bring to an office environment.

However, despite the joy and support that dogs are proven to bring to workers, they can come with additional responsibilities and drawbacks, too. We reached out to a number of the most prominent dog-friendly companies to discover some of the secrets to their success.

Meagan Soszynski, SVP People, at Yieldmo, a mobile advertising technology company, points to Dorian, a dog who has become the company’s mascot as a model citizen. “He’s been here every day ever since he moved to NYC to be with his new family about a year ago,” Soszynski said. Companies like Yieldmo are hoping that by opening their doors to dogs that it’ll contribute toward a warm atmosphere overall.

No matter your size, allergies are a real thing and then just some people are not dog or pet people. A company that wants to embrace a dog-friendly environment can’t lose sight of this. You could be creating a very negative environment, especially when thinking about a medical issue like allergies.

Susan Riskin, VP of HR for Bitly, a link management platform, said that across the organization’s three offices — in NYC, Denver and SF — they are open to employees bringing dogs to work. “We have two dogs in New York who I’d consider regulars: Nera and Noodle. Both are amongst the favorites!” she said.

And that kind of shared culture spreading is not limited to national offices. Ciara Hautau, a digital marketing strategist at Fueled, an app development company, said that “within the last two months, we’ve actually have had a lot of new dog owners” start at her Australia location. She said that now there’s a healthy rotation of eight dogs who come in with their owners, typically only a few at a time, stemming from a company decision that was fostered in the United States.

Not everyone in a dog-friendly office loves having dogs around, of course. “No matter your size, allergies are a real thing and then just some people are not dog or pet people, said Soszynski at Yieldmo. “A company that wants to embrace a dog-friendly environment can’t lose sight of this. You could be creating a very negative environment, especially when thinking about a medical issue like allergies.”

For those thinking about becoming dog-friendly, “be sure to lay out some expectations first before opening up this option to the office,” said Hautau at Fueled, starting with speaking to existing employees about their feelings on the subject, checking especially to find out if anyone is afraid of dogs.

And even if you’re letting the pups run free, you must police for certain behavior. “We strongly encourage that dogs do not climb up onto furniture in order to respect employees with allergies,” said Sofia Montgomery, a workplace coordinator for Justworks, which provides HR software.

Amanda Amato, Senior Marketing Manager, for Updater, a moving app, said, the company has drafted and implemented a “Pupdater Policy” that, among other things, caps pups at two days per week in the office. Further, there can only be two dogs per floor per day. “This policy ensures that we never have ‘too many’ dogs in the office at once, and also that employees who aren’t ‘dog people’ enjoy some doggo-free days,” Amato said.

Kicking back and relaxing

Running a startup can be both daunting and frustrating, especially on a tight budget. Not every company can afford to invest in game areas, external team-building activities, and a cupboard full of snacks. Choosing to host a dog-friendly office, though, is something that some founders can offer as an alternative. Nicole Centeno, Founder and CEO of Splendid Spoon, which sells healthy smoothies and soups, said that “dog energy really lifts and lightens the mood. We are a really optimistic and joyful bunch, but we’re also an early-stage, high-growth business which means lots of unknown challenges and more emotional ups and downs.” Centeno continued, “When a dog comes and sits on your feet during one of those tough moments it really helps you to exhale and find some perspective. Dogs are great medicine.”

Centeno isn’t the only one who turns to dogs for this type of benefit. Zlata Z., a senior product designer at Slice, a pizza delivery app, said that “We call the office dogs our ‘therapy’ doggos. Their presence helps relieve stress and bring joy throughout the day. It’s common for Slice employees to take a 10-minute break in the middle of a busy workday to pet one of the office dogs — it’s amazing how quickly that can help you feel calm and centered.”

Besides for the rejuvenation that pups promote, they can also create camaraderie. Montgomery at Justworks said that having up to 10 dogs around can add some comic relief to her and her colleagues. “I try to bring my dog in when I have a team meeting because everyone on my team loves it when she randomly rolls around on her back under the table making snorting noises,” she said. In that way, it’s less of a disruption and more a welcomed break for levity.

Wherever they may roam

Within offices that open their doors to dogs, there is still the question of where they should walk, sit, and claim space. Amato at Updater said that they have imposed no restrictions on or boundaries between humans and their four-legged friends. “Our pups are generally free to roam, but they tend to stay with, or at least near, their owners. If a dog owner has a meeting, they’ll either bring the dog with them or ask another teammate to keep an eye on them while they’re busy,” she said. (Both employees and dogs are listed on the company’s ‘Meet the Team’ page.)

Some companies are investing in making sure that the office is set up for these daily visitors: “Dog owners are encouraged to bring their dog beds in and we have two ‘lounge-type’ areas that the dogs will get comfortable in. We also have a dog treat and water station so they feel extra at home,” said Hautau of Fueled. At many offices, the dogs follow the lead of the workers, hoping to be included on the action. “They love the couch, but usually only when a team member is sitting there so they receive guaranteed pets,” Centeno of Splendid Spoon said.

However, you will have to occasionally deal with the fallout of a buddy being pulled away from his partner, when something important is being discussed behind closed doors. “Our mascot sometimes gets sad when his dad is in a meeting he wasn’t let into, and he’ll stand by the glass door scratching to be let in. Have to admit, it’s pretty cute,” said Soszynski of Yieldmo.

During the workday, “the dogs generally belong to everyone,” said Matthew Burns, Head of US Customer Success for Monday.com, a tool that helps teams work together. “We bring the owners in when there is a mess (rarely) or a fight (even more rare) but otherwise it’s very community driven. Owners will generally leave instructions in our daily updates the team checks but otherwise we try to be respectful.”

Nevertheless, some precautions are taken ahead of time, Riskin at Bitly said. “Owners also have to take responsibility when it comes to office cleanliness — dogs must be housebroken before coming in.” And there are other considerations, too: “We don’t allow employees to bring in dogs that aren’t their own as it’s difficult to hold them to the same standards of vaccinations and behavioral confidence,” said Montgomery at Justworks.

While “the owners are in charge of making sure that their dogs are getting their walks and their bathroom breaks,” at Slice, Zlata Z. said, the pooches for the most part get to select where they’d like to rest — and in whose care. “It’s always a nice surprise when one shows up at your desk!” she added.

Burns said that Monday.com’s dog-friendly reputation was a big draw for him to join the company three years ago. Quickly, his dog, a husky/chow mix named Kaito, became a favorite in the office. So much so that a colleague of Burns’s developed and introduced a mini booklet about Kaito that sits on the table in the company’s lobby. “Now almost every candidate has read that book and recognizes him” when they are brought in on site for interviews, Burns joked.

Sometimes it’s hard to get the dogs off your mind even outside of the office. Riskin at Bitly said that once a group of employees were on their lunch breaks and entered a store. “While in the store, they found a hat that had a picture of the spitting image of Noodle on it, so they bought it. It’s now in the office at the owner’s desk. They joke with the owner that when she doesn’t bring Noodle in, she has to wear the hat (of course she doesn’t, but they all want her to!).”

Employees say you have to adjust to and be ready for occasional inopportune barks and the occasional cleanup, which is all par for the course in these office environments. But sometimes unexpected moments can occur, leading to collective laughter. Percy, a bulldog and regular at Splendid Spoon, “makes a habit of dumping more water on the floor than he manages to get into his mouth, and someone inevitably slips in it or steps into his bowl,” Centeno said. If those are the worst perils that come with these two species sharing a workspace, this is a match made in doggy heaven.