This year’s Super Bowl LV averaged over 95 million viewers across TV and streaming. And as the matchup between Brady and Mahomes was a major draw on the field so were the highly anticipated commercials featured touching messages of national unity, appreciation for front-line workers, and a touch of nostalgia with characters like Sesame Street’s Big Bird and SNL’s Wayne’s World making appearances.

Remember, brands spend an enormous amount of money for a 30-sec commercial with the hope and goal of capturing their consumer’s attention. But the question always is…did it work?

For some, yes.  For some of the Super Bowl advertisers who also ran on the Yieldmo Marketplace, we measured attention before and after the Super Bowl and saw some amazing results.  Using Yieldmo’s AEROS Attention Analytics, we measured the real-time ways users interacted with the ads after the Big Game to see if there were changes to the ads’ attention rate 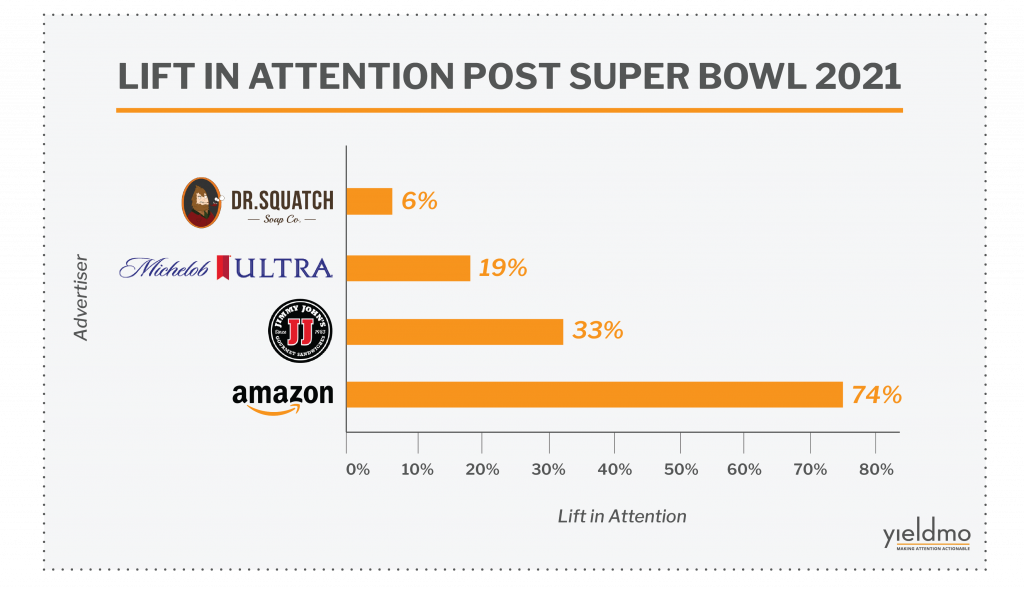 *Yieldmo’s attention rate is calculated based on a number of attention signals, which include gestures such as phone tilts, scrolls, and touches of the creative format. Our analysis does not reflect the overall or relative ranking of these ads but rather a small sample of the active campaigns that met criteria such as being active on the Yieldmo Marketplace for periods before and after the Super Bowl.

The Michelob ULTRA Super Bowl 60-sec commercial, “ALL-STAR CAST” features one real star, Don Cheadle, and a host of celebrity look-alikes in their seemingly natural elements to shine a spotlight on what’s real and fake in the world around us. Michelob Ultra saw a 19% increase in attention.

Jimmy Johns’ “Meet the King” storyline has Garrett as a kingpin for an unnamed sandwich company. The campaign was initially meant for regional broadcast. But as reported by the media trade pub Adage, Jimmy John’s officials liked the 30-second clip so much they invested in a Super Bowl buy. The bet appears to have paid off: Jimmy John’s received 33% more attention.

Amazon is no stranger to Super Bowl ads. The 2021 ad stars actor Michael B. Jordan as the company’s Alexa smart assistant. Fast Company named it the best ad of this year’s Super Bowl, and USA Today named it #3 on its annual ad meter. Combined with an ad for Prime, Amazon saw a 74% increase in attention.

The before and after increases in consumer attention from Super Bowl LV capture precisely what we at Yieldmo have been saying for a long time. The campaign doesn’t stop once the TV ad is over.

Small screen digital buys can support TV buys and provide a bigger payoff for the whole campaign. So whether it’s chips, beer, cars, men’s pine tree scented bar soap, or insurance, memorable creative paired with a robust digital campaign can extend the life of a Super Bowl ad beyond the game.

If you’re looking for better ad experiences and a real-time view of the attention your ads are generating, get in touch by emailing us at info@yieldmo.com.